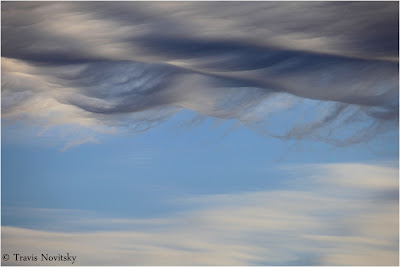 I am always on the lookout for interesting clouds to photograph, and this morning I definitely saw some interesting ones.  The clouds shown in this photo were very high altitude and held their shape for a very long time.  I shot this photo with my Canon 100-400mm lens at 400mm.
Posted by Travis Novitsky at 3:06 PM No comments:

Spring on the Beaver River 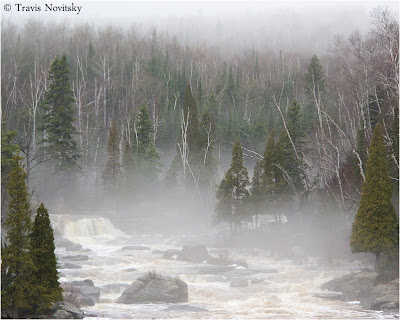 I took a drive to Duluth today and along the way saw a lot of incredible fog-filled views which were a result of overnight and morning rainfall.  The best view by far was this one of the Beaver River.  As we drove across the Highway 61 bridge that spans the river I made a quick glance upstream and my jaw dropped when I saw all the fog over the river.  After we crossed the bridge I couldn't resist pulling over and parking the truck so I could walk back out on the bridge and make a few photos of this beautiful scene. 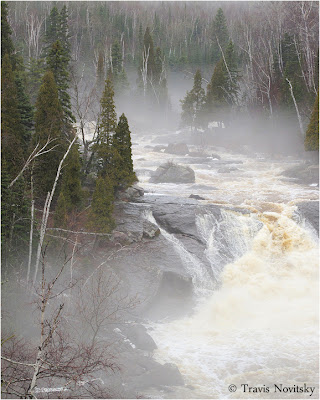 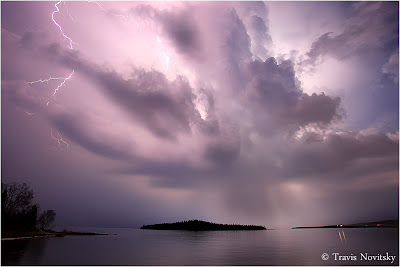 Ah, the joys of spring!  Even if it is a bit early, I do love the signs of spring.  Perhaps the most exciting sign of spring (for me, anyway) is the return of the thunderstorm.  Last night we had a whopper of a thunderstorm make its way over Grand Portage.  This was a very localized storm, with brief but heavy rainfall and some medium-sized hail.  Oh, and an awesome display of lightning!  I was up late last night working on editing some photos when I started seeing flashes of light outside my living room window.  At first I thought I was seeing things.  I thought "That can't be lightning... it's only mid-March!"  But, sure enough, as time passed I noticed more and more flashes and soon it was apparent that it was indeed lightning.  I grabbed my camera gear and headed out to do some shooting. 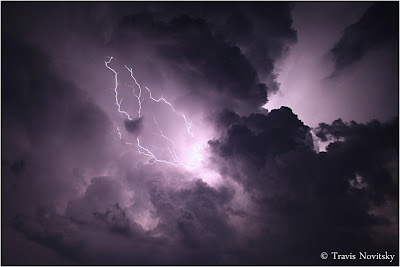 I went to a location just a half-mile from my house, one that afforded the best view of the approaching storm and one that would allow me to photograph the storm before any potential moisture hit.  After photographing the lightning flashes for about 15 minutes, I noticed something that is not often discernible with an approaching thunderstorm in this area.  I could HEAR the rain and hail approaching!  Before the storm hit shore the conditions were incredibly calm, not a lick of wind and the lake was smooth as glass.  But, out behind the island, the hard rain and hail was hammering the surface of the lake.  What I heard was an ever-increasing sound, a haunting WHOOOOOOOOOOOOSH as the lake was pummeled by the rain and hail.  Soon the sound was quite loud and when the lightning flashed I could see that at any moment the moisture was going to hit shore.  A good time to get back in the truck, I thought!  So I packed up my camera and walked back to the truck.  No sooner had I taken just a few steps when the rain started to fall.  It was only about 100 feet back to the truck and by the time I got there it was pouring.  By the time my gear was put away in the back seat and I was sitting in the driver's seat, the sound of hail was all I could hear as it pelted the sheet metal of my truck.  I drove around to the other side of the bay to see if I could get a different angle on the storm, and it was barely raining just two miles away!  Short but sweet, as they say.  The rest of the night we had a crystal-clear sky exploding with stars.
Posted by Travis Novitsky at 10:31 AM No comments: 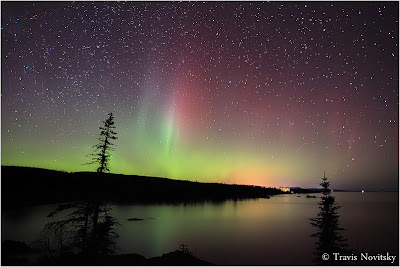 Here's what I captured last night.  Throughout the afternoon I was watching the Aurora forecast sites predicting STORM-LEVEL Auroras only to watch the index fall just as darkness was approaching in Northern Minnesota.  Even though the activity level was no longer classified as "STORM" by the time it got dark here, it was still classified as "ACTIVE", so I decided to head out and watch the sky for a while.  It was a good thing I did, as I saw plenty of activity in the first hour that I was looking.  At first all I could see were several faint pillars of light dancing from East to West across the sky.  Soon those pillars were joined by a glowing green "cloud" of light.  Above the lights the sky was saturated with stars.  Lake Superior was so calm the only sound coming from the shoreline below my clifftop vantage point was the barely audible, soft lapping sound of the water as it kissed the rocks along the beach.  It was a sublime night for sure!
Posted by Travis Novitsky at 10:26 AM No comments: 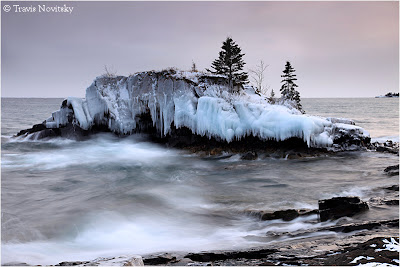 Boy, this has been a tough winter!  Basically a dud in a lot of ways.  Very little snow and very little ice, which means I have been doing very little shooting compared to past years.  This past weekend, however, I did get out and make a few photographs.  The lighting was overcast with rather thick cloud cover most of the weekend, so I decided to concentrate on making close-up images of the ice formations on Hollow Rock.  It's always fun to use a telephoto lens and zoom in on parts of a landscape rather than trying to capture the entire scene that is laid out before you.  Sometimes I can spend hours making these types of images. 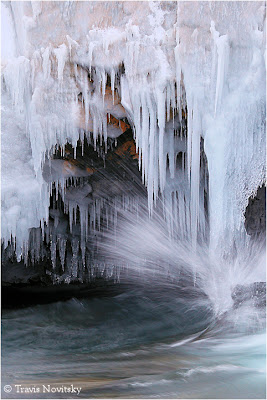 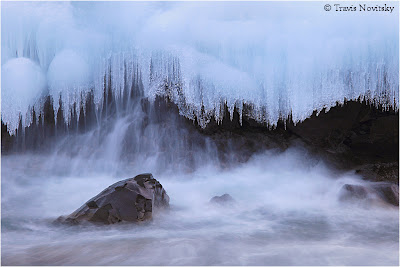 Posted by Travis Novitsky at 3:08 PM No comments: