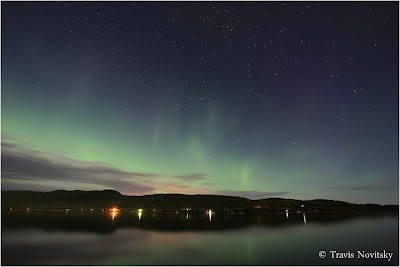 This is my first northern lights image made with the Canon 5D Mark II. I've been sooooo anxious to see northern lights ever since getting the 5D II in March of last year. I had heard that there was going to be a heightened chance of seeing northern lights over Friday and Saturday night this past weekend, so I made it a point to stay up late and check the sky about every 15 minutes. I was about to give up on Friday night when I checked the sky one last time at 2:00 a.m. and lo and behold, there was the aurora! I had my camera gear ready, so I grabbed it and went down to the beach in front of my house. I hopped in my boat and headed out to Grand Portage Island, which is straight out in front of my house.

The shoreline I live on faces to the south, so shooting from shore doesn't give the best perspective for photographing the aurora. From the island, I'm able to shoot due North and thus have a much better view of the lights. Its a good thing I was prepared and ready to go, as once I arrived on the island I was only able to make about a half dozen images of the northern lights before a large cloud bank moved in. For the brief moments that the event lasted, it certainly was an amazing sight to see. Complementing the lights was some of the calmest water that I've ever seen on Lake Superior. Also contributing to the WOW factor of the night was the light of the full moon coming from behind me as I made this image. I used my Canon 17-40mm lens with an exposure time of 25 seconds, aperture f4, ISO 400. 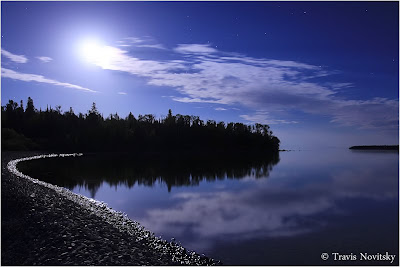 Above image: "May moon over Pete's Island"

After I had photographed the aurora looking to the north above the village of Grand Portage, I turned around and saw this incredible moonscape laid out before me looking to the south. This image was an unexpected treat of the evening as I had only been expecting to capture the northern lights, not a nice moonscape as well! This image was made with a Canon EF 17-40 lens, aperture f4, ISO 800. Exposure length was 20 seconds. White balance was set to fluorescent to bring out the blue in the sky. And yes, those are stars in the sky :-)
Posted by Travis Novitsky at 11:28 PM No comments:

Reflections of May moonlight 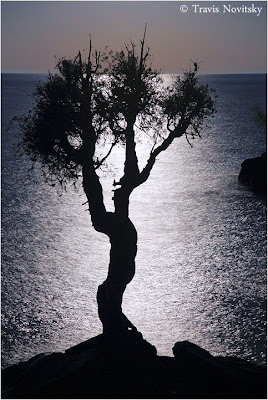 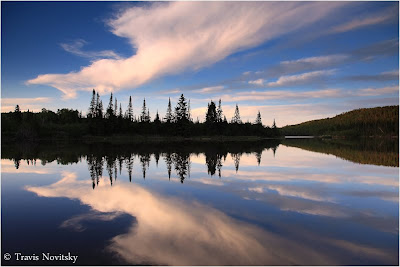 This image is of the Pigeon River in northeast Minnesota, just downstream from Grand Portage State Park (which is where I work for my "day" job). The Pigeon, like many rivers, is a river of many moods. The majority of the river is characterized by very rugged terrain, with the water tumbling over boulders and through narrow gorges in rapids of varying intensity. Some areas, like the one pictured here, are very serene. The area shown in this image is only about a mile upstream from the mouth of the river.

The Pigeon originates on the edge of the Boundary Waters Canoe Area Wilderness, and after its mostly violent but sometimes peaceful journey through the rugged valleys of northern Minnesota it empties very quietly and with little fanfare into Lake Superior. As mentioned earlier, this particular spot along the river is just downstream from the state park where I work. It is one of my favorite places along the river and I often stop here after work to see what the conditions are like. On the evening I made this image, I had already gone home for the day but as sunset approached I was very intrigued by the clouds that were lingering in the sky. I immediately thought of this place on the river and how calm the water usually is... little did I know what an incredible sight I would find when I arrived!

This is without a doubt the coolest cloud I have ever seen over this part of the river. This image was made only moments after the sun went down behind me. The point of view in this image is actually looking east/northeast, but as often happens immediately after sunset the clouds took on quite a glow. My outing to the river resulted in an experience (and an image) that I will never forget! Shot with my Canon EF 17-40mm lens, shutter speed was 1/50, aperture f8, ISO 200. Since the sky was a bit brighter than the reflection on the water, I did also use my Singh-Ray 3-stop graduated ND filter in the creation of this image.
Posted by Travis Novitsky at 10:46 PM 1 comment: 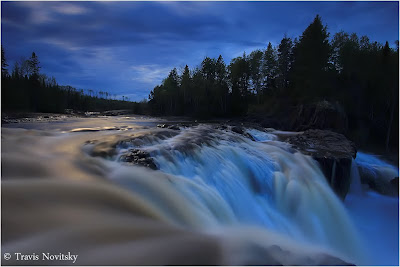 WOW... it sure was cool watching the half moon over Middle Falls of the Pigeon River last night as the last of the daylight faded from the sky. Walking back to the car in the dark was fun, too. When you've got moonlight and a headlamp to guide your way, being in the woods at night is a magical experience.

Posted by Travis Novitsky at 11:38 PM No comments: 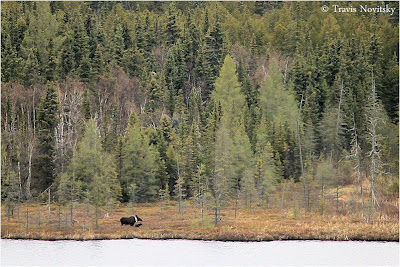 Today on my way to work I saw, for the first time, a Moose on the shoreline of Teal Lake. Not only that, but it was a cow Moose with a calf! To top it off, it was one of the Moose that have been collared by the Grand Portage Reservation Natural Resource Department! What a treat to see these animals today. The reservation has collared several Moose in order to track their movements over the course of two years and they will be using the collected data to help manage reservation lands for the benefit of Moose. I sat and watched this mother and child for about 10 minutes, and they barely moved. Just before I left the mother laid down in the grass and the calf followed suit. I wonder how long they stayed in this spot?
Posted by Travis Novitsky at 9:10 PM No comments: 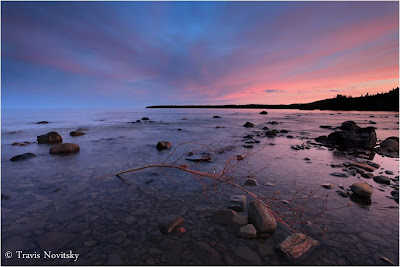 After spending a long afternoon hiking in the deep woods of northern Minnesota, I went down to the Lake Superior shoreline on Grand Portage Bay to photograph the sunset. After a quick look around, I found this piece of Red-Osier Dogwood laying in the shallow water. I don't know how it got there (wind, or perhaps someone threw it out there), but it made for an interesting foreground for this image. This image was captured with my Canon 17-40mm lens, shutter speed 2 seconds, aperture f16, ISO 100. I also used my Singh-Ray 3-stop reverse graduated ND filter.
Posted by Travis Novitsky at 11:22 PM No comments: 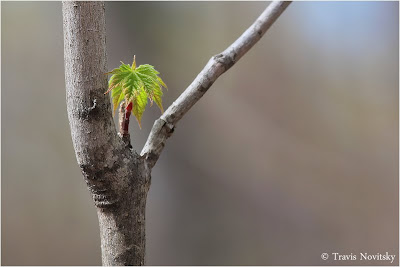 The trees were just starting to bud a few days before I made this image and I was hoping, as I have for the past few years, that I would be able to find an image that would convey the beginning of green-up in the northwoods. The tree is a Mountain Maple, also sometimes referred to as Moose Maple. I found this composition while spending the morning watching a Ruffed Grouse perform his spring drumming ritual. In between drumming sessions the Grouse had walked off into the woods and while waiting for him to return I was looking around at the surroundings for possible images when I spotted this new little leaf poking out from the notch in the Maple. I trained my 100-400mm lens on the leaf and made this image.
Posted by Travis Novitsky at 11:16 PM No comments: