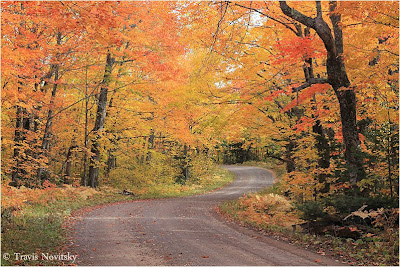 The colors are fantastic right now! Better get out there and enjoy them while they last!
Posted by Travis Novitsky at 4:00 PM No comments: 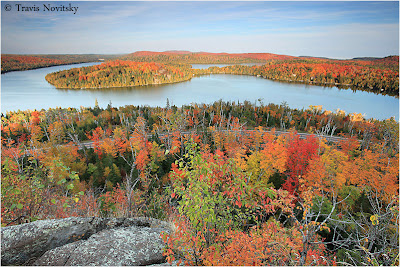 Autumn at White Sky Rock along the Caribou Trail in Cook County, MN.
Posted by Travis Novitsky at 3:59 PM No comments: 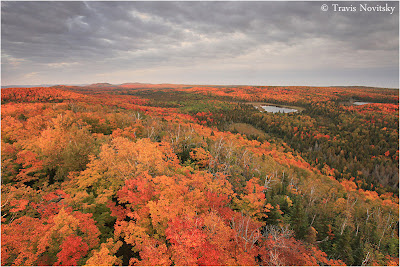 Photo taken just before sunset this evening. The colors are starting to get really nice out there!
Posted by Travis Novitsky at 3:58 PM No comments:

Aurora Borealis over the Border 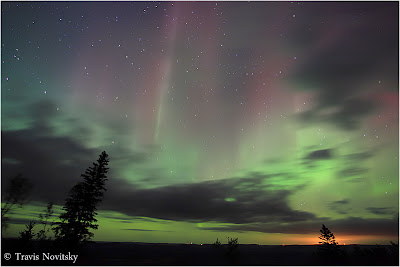 Northern Lights on September 26, 2011 - I was standing on the U.S. side of the U.S./Canada border in Northeast Minnesota when I took this picture. If you look closely you can see a couple of small red lights from communication towers on the horizon. Those towers are in Ontario, Canada. 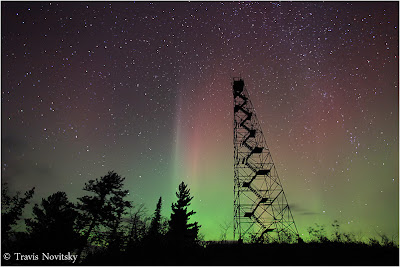 Above: "Mt. Maude Aurora" - Northern Lights from last night at about 9:13 P.M. Exposure time for this shot was 30 seconds, aperture f4, ISO 2500 using a Canon 5D Mark II camera and Canon EF 17-40mm L lens. This shot also made the front page at spaceweather.com today!
Posted by Travis Novitsky at 3:56 PM No comments: 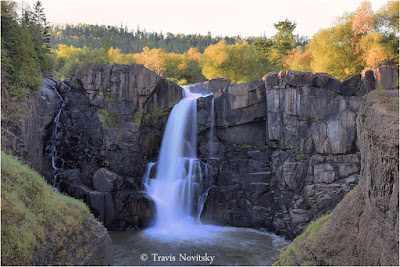 I made this image a couple of days ago on the Pigeon River at Grand Portage State Park. Normally I don't care for HDR (High Dynamic Range) photopraphy but in this instance I decided to try HDR, since my split grad filter just wasn't giving me very good results. The image you see here is a blending of 3 different photos at 3 different exposure settings, one exposed for the brightly-lit trees, one exposed for the dark foreground rocks and another one exposed for the middle areas of the scene.
Posted by Travis Novitsky at 3:54 PM No comments: 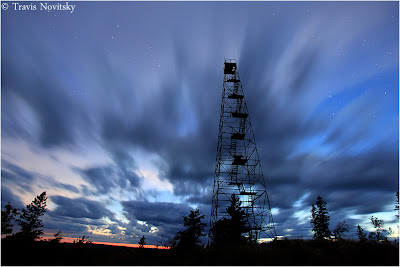 A 60 second exposure of fast-moving clouds at dusk taken on September 2, 2011.
Posted by Travis Novitsky at 3:54 PM No comments: 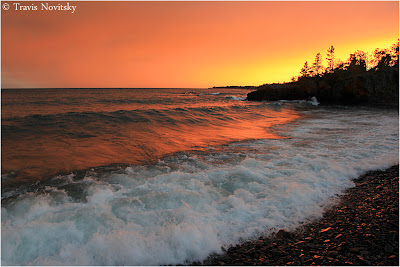 Smoke from the Pagami Creek Fire near Ely, MN makes for a dramatic sunset over Lake Superior in Grand Portage, MN on September 13, 2011. One thing's for sure... all this smoke in our sky makes for some pretty wild sunsets! 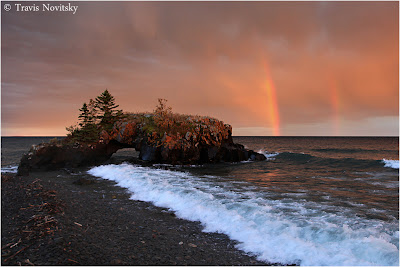 Posted by Travis Novitsky at 3:53 PM No comments:

My new habit of checking the spaceweather.com website every day seems to be paying off! Lately I have been getting quite a few nice shots of the Aurora Borealis, thanks in no small part to the information gathered from the spaceweather.com site. On Thursday, September 8th I checked the website just like I do any other day. Thursday's visit to the site revealed that a series of CME's (Coronal Mass Ejections) had occurred on the sun, and that those CME's had occurred on the side of the sun that was facing Earth. When this happens, generally it takes about 48 hours for them to reach our atmosphere... and when they do, beautiful Auroras are the result. 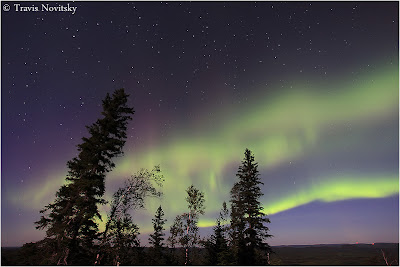 With the knowledge of the incoming CME's, and their expected time of arrival the night of September 10th, I started making my plans. I had to work on the 10th, so I knew that without some solid sack time I would be a zombie before the lights started to flare up. So, as is my normal plan of attack when shooting the Northern lights, I got done with work on the 10th, went home and went straight to bed. I slept from 5:00 PM until 10:00 PM, and was then refreshed enough (I hoped) for a full night of shooting. 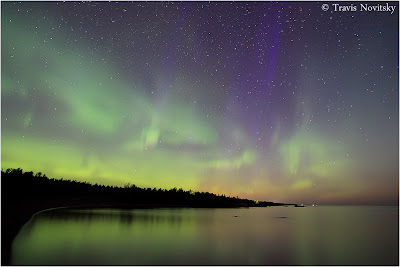 As it turns out it was a good thing I got that sleep time in, because the lights didn't really start with any significance until just after midnight, and they continued all night until daylight started to creep into the sky, just before 6:00 AM. This particular photo was made at 4:42 AM along the shores of Lake Superior. Before moving to the shoreline, I had spent most of the night up on Mt. Maude, where the higher elevation provides almost a 360 degree view of the night sky. While on Mt. Maude I took a series of almost 400 photos of the dancing Northern lights and condensed them into a timelapse video, my first ever attempt at such a thing. All in all, it was a tiring, yet very rewarding, night of photography!
Posted by Travis Novitsky at 3:50 PM No comments: 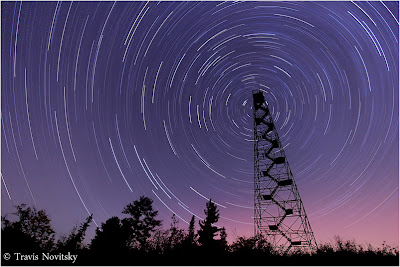 This is my favorite picture from last weekend's night shooting sessions. It takes a bit of planning and preparation to pull off a shot like this but when you take your time and set things up right, the results are worth it. After about 20 "test" shots to dial in the composition I was ready to start the long exposure. This was a 96 minute exposure that I started at exactly 10:00 PM on September 3rd. The lens aperture was set at f4, and the camera's ISO was set at 100. Careful placement of the North star makes (I believe) for a very compelling composition. Taken with a Canon 5D Mark II camera and Canon EF 17-40mm lens.
Posted by Travis Novitsky at 3:49 PM 2 comments:

Eagle in a tree 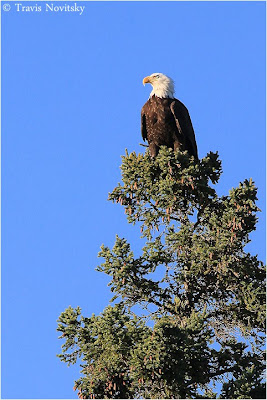 I just get home from work
and what do I see...
An Eagle in a tree
and he's lookin' at me! 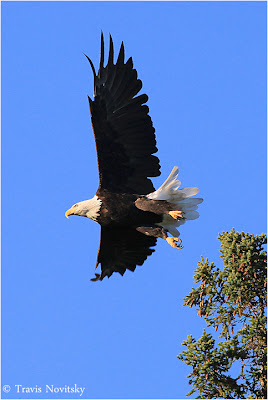 Posted by Travis Novitsky at 3:48 PM No comments: 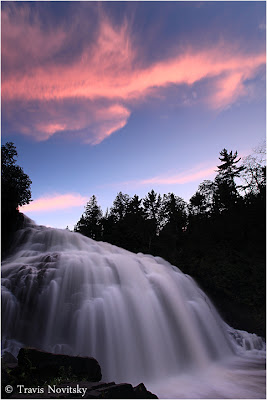 Last night's sunset at Partridge Falls on the Pigeon River. This wonderful sunset was only the beginning of what was to become an amazing night of photography! 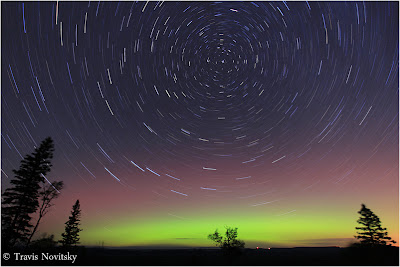 Above: After sunset at Partridge Falls I was out shooting stars and the Milky Way when a quick glance to the North revealed a nice surprise: a faint glow of Northern lights on the horizon! There wasn't any aurora activity in the forecast that night, so I was quite excited when I looked to the North and saw the lights. Since they were so faint, I decided to try a long exposure. This image ended up being 30 minutes long and I just loved the effect of the Northern lights combined with the spinning stars.
Posted by Travis Novitsky at 4:47 PM No comments: 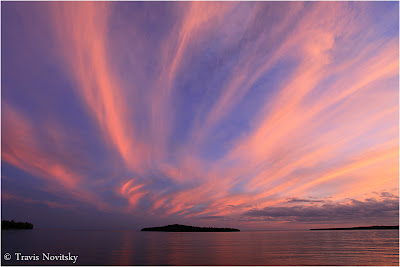 Here's a shot of last night's AMAZINGLY AWESOME sunset over Lake Superior. It was certainly one of the best sunset skies that I have EVER seen!
Posted by Travis Novitsky at 3:44 PM No comments: 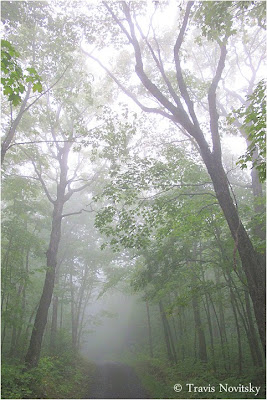 A foggy afternoon in the forest on the last day of August 2011. This was taken with my 'point-and-shoot' camera, a Canon G11.
Posted by Travis Novitsky at 3:43 PM No comments: