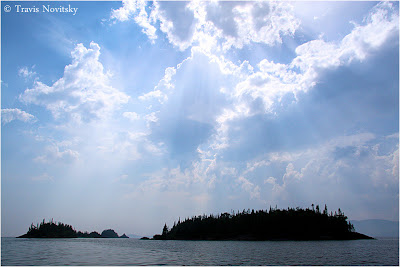 On this chilly winter's night my thoughts wander to the warmth of summer days. So, I worked up a photo that I've long been wanting to put on my website but just never got around to it. This one is from the summer of 2005. I had spent the morning photographing around the Susie Islands and was heading back home mid-afternoon when a few summer rain squalls blew towards the islands from across Wauswaugoning Bay. Just moments after I made this photo I was caught in some pretty intense downpours, but they only lasted a few moments and once again the sun was shining. Gotta love those summer days!
Posted by Travis Novitsky at 7:20 PM No comments: 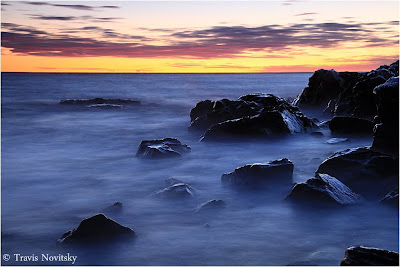 I haven't been out shooting a whole lot lately, so here's a photo that I took earlier this winter. This was back in December (the 7th if you really want to know) along the Lake Superior shoreline about 10 miles or so North of Grand Marais. We really didn't have any snow yet when I made this photo, but there was some ice along the rocky shore. What caught my eye in this scene was the way the rocks were sticking out of the waves as they crashed into shore. A 15 second exposure really smoothed out the wave action and created a dreamy look that I love to portray in my shoreline photos.
Posted by Travis Novitsky at 7:16 PM No comments: 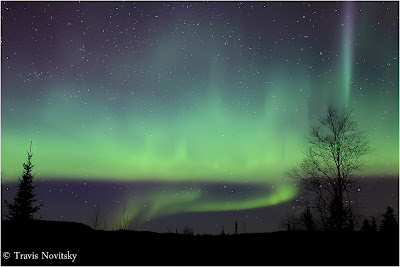 Well, I've been suffering "Aurora withdrawals" since our last two opportunities for Northern lights viewing in Northern Minnesota were cancelled due to heavy cloud cover. As a way of getting my "fix", I went back to some photos from the night of March 10, 2011 and found a couple that I had not yet worked on. The photo you see here is one such photo. This was captured near the tail end of what I still consider to be the BEST Aurora display that I have ever seen.
Posted by Travis Novitsky at 7:11 PM No comments: 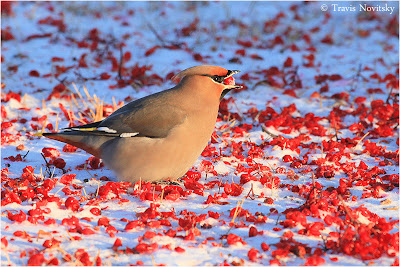 With the cold weather hanging on for another night, I figured I would get up early and drive to Grand Marais to photograph the steam behind the lighthouse. What I wasn't figuring on were the thousands of Waxwings that were hanging out in the various trees in the Grand Marais campground. I found one area where all the Mountain Ash berries had blown off the trees and down onto the ground. I watched as hundreds of Waxwings hopped around amongst the berries, choking them down just as fast as they could pick them up. I don't know how I did it, but I managed to isolate this one bird against the backdrop of berries. It is my favorite shot of the morning.
Posted by Travis Novitsky at 6:29 PM No comments: 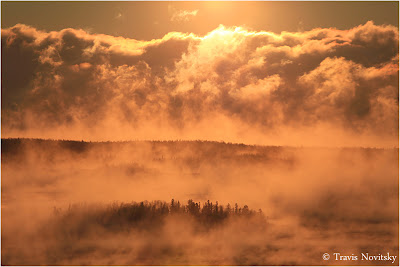 Sunrise and Sea Smoke over the Susie Islands on January 19, 2012. This morning when I saw that the temperature was well below zero (a rarity this winter!), I knew that there was going to be plenty of sea smoke (steam) rising off the waters of Lake Superior. So, I headed to my favorite place to make photographs of the steam. It's difficult heading outside on such a cold morning, but the spectacular photos make it worth the effort! 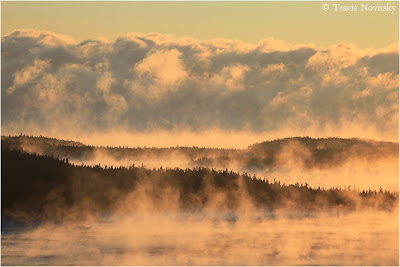 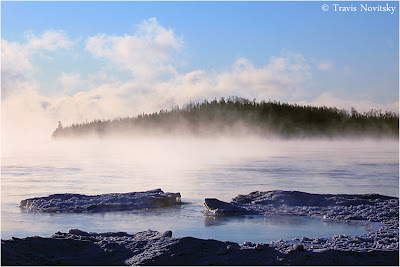 Posted by Travis Novitsky at 6:19 PM No comments:

Sunset on the bay 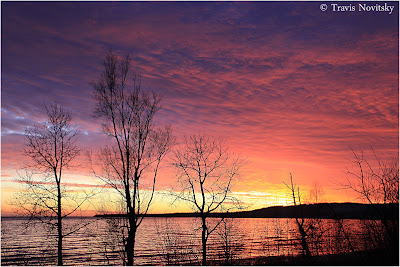 Grand Portage Bay on Lake Superior - Grand Portage, MN. Here is a shot of the BEAUTIFUL sunset that we were fortunate to witness last night! Because of the cloud cover it seemed as though sunset wasn't going to be very good, but by the time the sun dipped below the horizon there was a small break in the clouds which allowed the sunlight to shine through and illuminate the underside of the clouds. SPECTACULAR!

Posted by Travis Novitsky at 6:15 PM No comments:

Dancing with the clouds 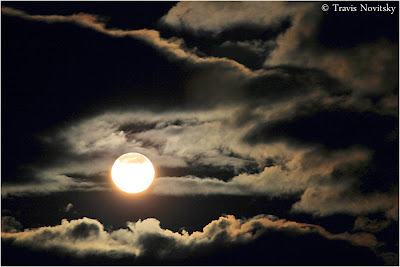 Moonrise on January 9, 2012. Had great fun last night watching the moon dip in and out of the clouds as they passed by. The first thing I thought of was "It looks like the moon is dancing with the clouds!". Voila! Another image title :-) 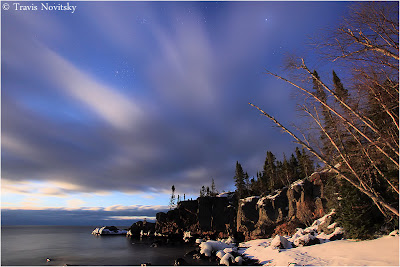 Last night as the moon was rising the light on the surrounding landscape was sublime. The moonlight, clouds, stars and snowy landscape made for quite a memorable scene! I know I've said this many times before, but I can't help myself by saying it again: "I LOVE living here!" 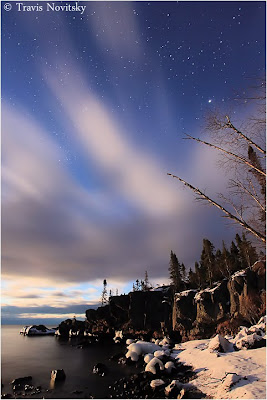 Posted by Travis Novitsky at 12:49 PM No comments: 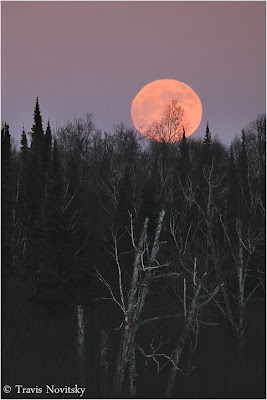 Taken yesterday at Grand Portage State Park in Northeast Minnesota. As I was leaving work I spotted the moon rising across the Pigeon River and it was BEAUTIFUL so of course I had to get the camera out and make some photos!

Posted by Travis Novitsky at 12:46 PM No comments: 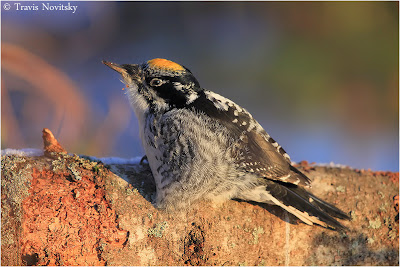 We had a unique visitor today at the state park where I work. It was a rather chilly and blustery day, but that did not seem to deter this intrepid little woodpecker. He spent most of the afternoon pecking at the trunk of a fallen Spruce tree. He also apparently was not bothered by my presence, as I was only about 10 feet away from him when I made this picture. My first thought was that it was a Black-backed Woodpecker, but I have since been corrected and am told that it is an American Three-toed Woodpecker. Whatever he is, he sure was a pretty little bird and was a lot of fun to watch!
Posted by Travis Novitsky at 12:36 PM No comments: 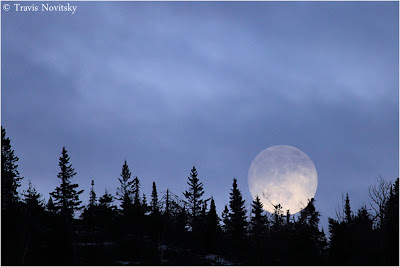 Here's a shot of last night's moonrise as I was heading home from work. I love it when the moon is passing right over the tree line. It was quite a beautiful sight!

Posted by Travis Novitsky at 12:31 PM No comments: 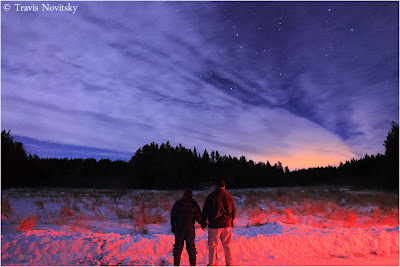 We were out watching for the Quadrantid meteor shower last night. Unfortunately we had quite a few clouds blocking the part of the sky that the meteors were supposed to be originating from. After a while the clouds did go away, but even then all we saw were a few very faint meteor streaks, and only one big fireball. Even so, it was a fantastic night to be out stargazing!
Posted by Travis Novitsky at 5:30 PM No comments:

Steamy morning in Grand Marais + Snow flurries on The Grade 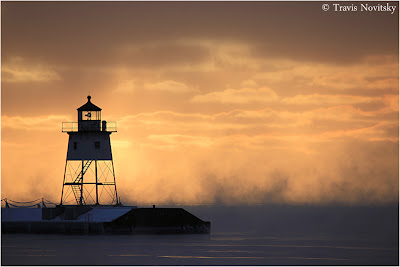 This photo was taken the morning of January 3, 2012. It was probably the coldest night so far of this winter, so I figured there might be some sea smoke (steam) rising off the lake in the morning. I was right! I headed into Grand Marais to catch the steam as it rose behind the lighthouse. When I first got there I was a little disappointed to see thick clouds and not much color. Soon after the sun rose, however, the clouds started to break up and color started to stream down from the sun, which was hidden behind the clouds along the top edge of this photo. 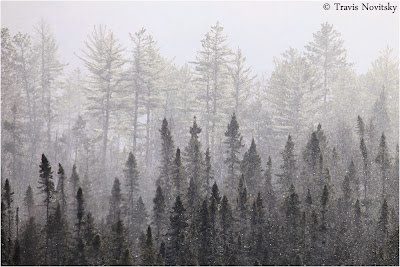 After my morning along the Grand Marais harbor, I took a drive up along "The Grade", a dirt road that connects the Gunflint Trail with the Caribou and Sawbill Trails. While I was driving along The Grade I went through several snow flurries, and during one of those snow flurries I noticed how the falling snow was adding depth to the treeline across a frozen lake, and couldn't resist stopping to photograph the scene.
Posted by Travis Novitsky at 4:18 PM No comments: