The meeting of Earth and Sky 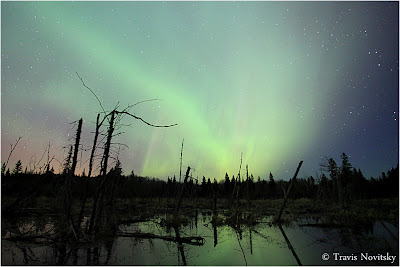 Crazy cool, INCREDIBLE northern lights last night!  What made the night totally unforgettable was not only the lights but the music of nature.  Spring peepers and wood frogs were calling all night long and while I was shooting over a lake I could hear a barred owl calling from across the lake.  It was one of the best nights I've ever spent in the woods with my camera!  For the first hour of viewing, the Aurora held the form that you see in the photo above.  To me it sort of resembled the funnel cloud shape of a tornado.  This photo was taken at about 11:00 PM.  A couple of hours later the scene was totally wild as the lights easily filled 75% of the sky and were moving much, much faster than they were when the above photo was made.  The lights shown in the photo above were hardly moving at all.  The variety that exists in the lights of the Aurora never ceases to amaze me! 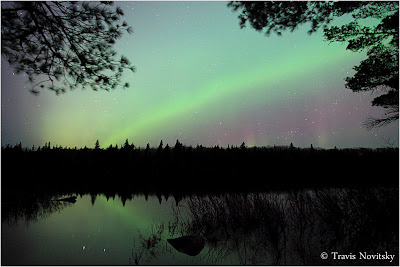 The last few times I've gone out shooting the Aurora I've been trying to get more creative with some of my compositions.  I've been trying new locations as well as new perspectives.  The above photo is one such perspective, with the lights reflecting in the lake and the top corners of the image framed by pine branches.  I personally really like this composition.  To me it feels like I am looking through a window out into the scene beyond. 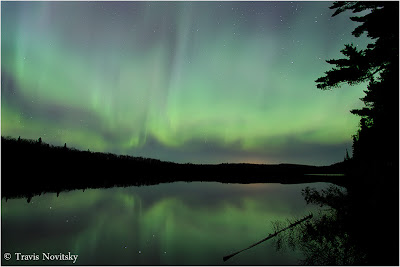 This was such an incredible night of photography, it's hard to imagine being able to top it.  Between 1:00 and 2:00 AM the lights were some of the best I've ever seen.  At the time the photos below were taken, the lights were flickering incredibly fast and it felt as though they were actually touching the tops of the trees.  They were emanating from the sky directly overhead and washing down over the surrounding landscape.  Indeed, the Earth felt connected to the Sky that night. 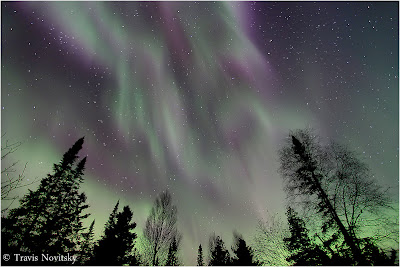 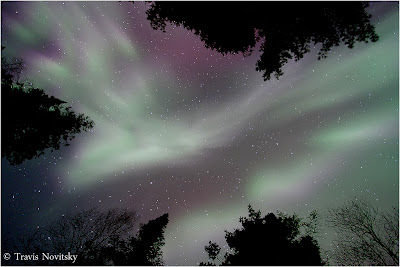 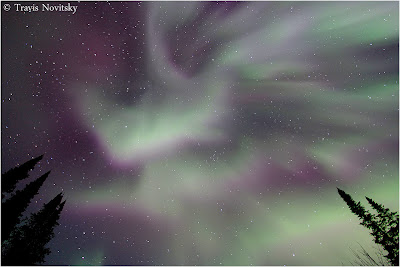 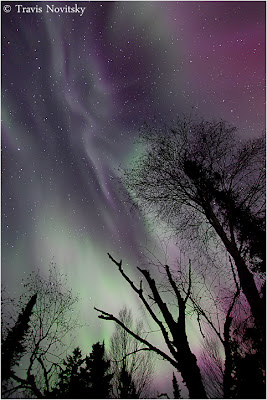 Posted by Travis Novitsky at 11:10 AM No comments: 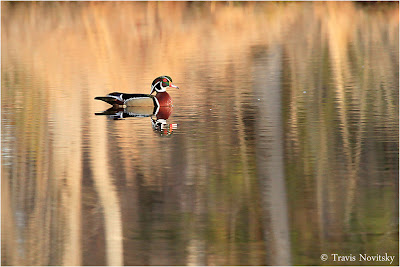 This evening Jessica and I went to a friend's house to use his photography blind in hopes of seeing the Wood Ducks on his pond.  We were told that each day there were anywhere from two to sixteen ducks using the pond.  We went into the blind at 5:30 PM and the first pair of Woodies landed at 6:00.  They were only on the pond for about 20 to 30 seconds, then they walked up into the woods on the opposite side of the pond from us.  We didn't see any more ducks until 7:00 PM, when a group of 4 more landed.  When they flew over the blind we could hear the "whooooooosh" or air under their wings.  5 minutes or so later a few more landed.  Ultimately we ended up seeing a total of 9 Wood Ducks and 4 Mallards.  We also saw the resident Muskrat swim back and forth across the pond several times.  Oh, and there was a Ruffed Grouse drumming throughout the evening in the nearby woods. We left the blind at 7:30 PM, just as the spring peeper frogs were starting to sing.  It was an unforgettable spring evening in the Minnesota Northwoods! 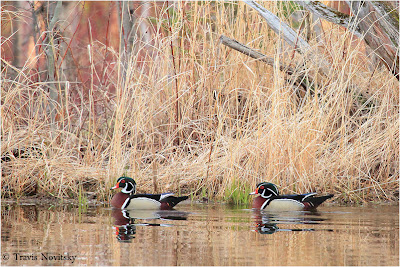 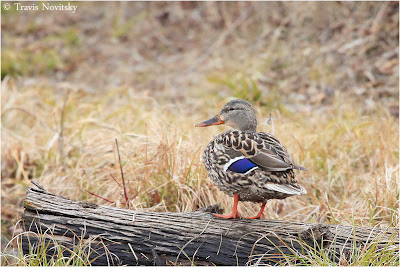 Posted by Travis Novitsky at 11:24 PM No comments:

A beautiful morning in the Badlands 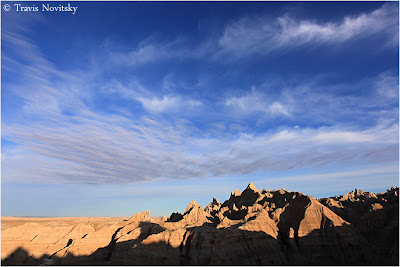 After my recent visit to Nebraska, I took a slight detour on the way home to visit the Black Hills and the Badlands of South Dakota.  I arrived in Badlands National Park in the late afternoon hoping for some nice sunset conditions, but it was not meant to be.  The day ended much the same way it began: with overcast skies, high winds, and very little color in the sky.  The following morning was a different story.  The wind had died overnight and was nothing more than a slight breeze, and the heavy cloud cover had disappeared along with the wind.  What remained were some very intriguing clouds that added a lot of interest to my wide-angle landscape shots of the Badlands.
Posted by Travis Novitsky at 9:14 PM No comments:

Here is a shot from Custer State Park in the Black Hills of South Dakota.  After spending almost 3 days in Nebraska photographing the Sandhill Crane migration in unusually hot temperatures for spring (each day the temp almost hit 90 degrees!), it was nice to drive up to the Black Hills and have the weather change along the way.  On this day the temp never got above 45 and in the higher elevations of the hills it was about 36 degrees and sleet was falling from the sky. 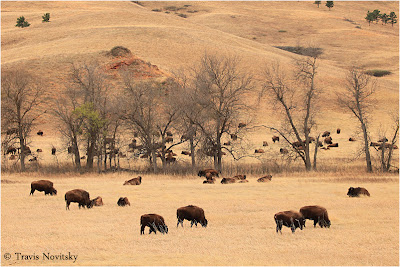 This photo was taken along the "Wildlife Loop Road" in Custer State Park. This state park is a great one for wildlife.  I saw lots of other critters as well, but the Bison stole the show.  I saw probably close to 200 Bison.  While I enjoy a good close-up shot of an animal, I also like to compose shots that show them and their surrounding environment.  I think (in most cases) that photos such as this tell more of a story than a close-up does.  At any rate, I hope you like it!
Posted by Travis Novitsky at 8:30 PM No comments:


As the sun rises each morning over the Platte River in Central Nebraska, it is a regular activity for the cranes, as they are waking up, to stretch their wings and sometimes do a little dance for their partners or potential partners.  After they stretch they will often jump up and down in the air, flapping their wings and exhibiting a number of other "dance" moves for any partner that might be interested :-) 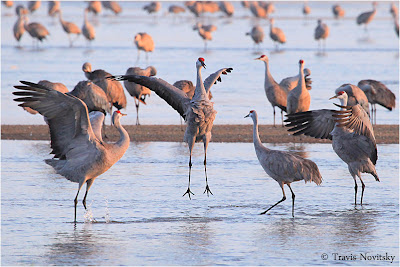 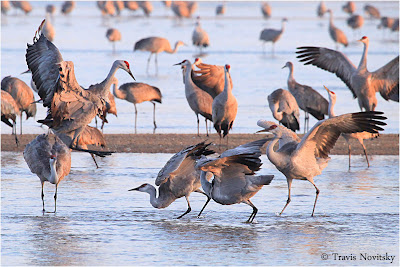 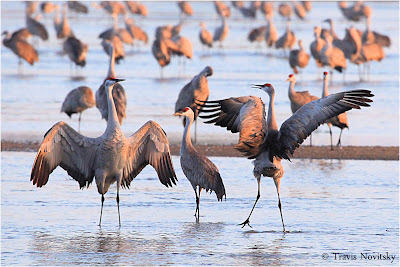 Posted by Travis Novitsky at 6:36 PM No comments:


Nebraska or Bust!  Sandhill Cranes here I come... I get so excited this time of year not only to photograph the cranes but also simply just to SEE and HEAR them.  They are one of my favorite birds, magnificent animals and also one of the oldest, with one of the longest fossil histories of any bird still found today.

We arrived in Kearney, Nebraska at 4:30 this afternoon.  The temperature was 83 degrees when we arrived.  It is supposed to reach 89 tomorrow and everything (grass, trees, etc.) is very green already!  I have been down here 5 times already this same time of year and I've never seen it so green.  Kind of surreal.  We got lucky and were able to get into a group photography blind this evening at Rowe Sanctuary.  Even though we are a week later than we were last year, there are still plenty of Sandhill Cranes in the area.  Sunset over the Platte River was nothing short of AMAZING! 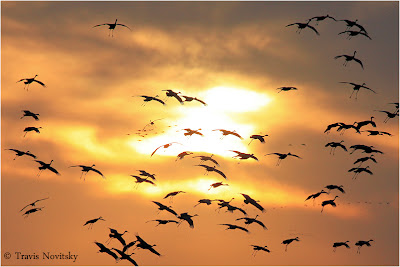 Sandhill Cranes are birds that seem to be full of so much personality.  One can't help but think of them as goofy birds when you see them coming in for a landing.  While flying they are quite sleek with their legs sticking straight back and their necks stretched straight forward.  When landing, however, they flare their wings and their feet dangle beneath them while their heads stick up into the air.  I just love these birds! 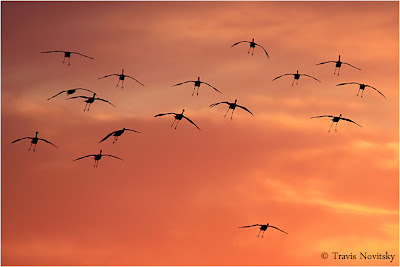 We had a great time this year photographing the cranes in Nebraska.  The conditions were much more favorable for photography than they were last year.  Last year the river's water level was too high which meant the birds were roosting farther away from the blinds than usual, and we had very little good light.  This year was different.  We had awesome sunset and sunrise light and the water level was lower which meant more sand bars and more places for the birds to roost.  The photo below could very well be my favorite shot from this year's trip.  I almost couldn't believe it when I saw that one crane start walking to the left.  I thought "No way!  He's gonna walk right through the sun's reflection on the water!"  Sure enough, he did... and provided me with an awesome photo to share! 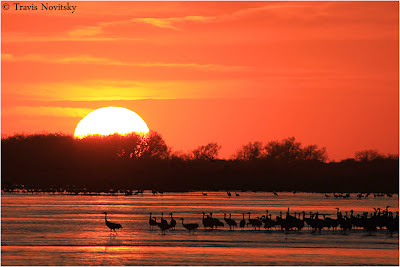 We had some beautiful light in Nebraska this year, which made up for the gray skies that dominated our trip last year.  The photo below is one of my favorite post-sunset shots from this year.  After the sun goes down the sky glows for several minutes and the river reflects that glow.  It was during this time that this photo was made. 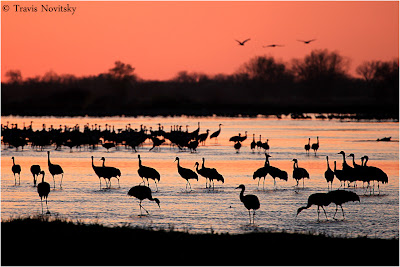 Posted by Travis Novitsky at 10:14 PM No comments: