I can stretch my wings just like Mom and Dad! 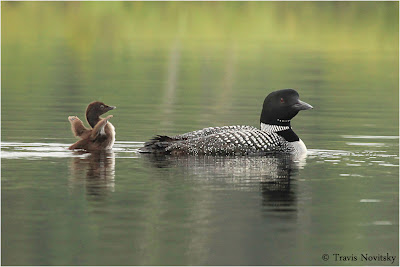 This evening I made it back up to visit the Loons for the first time since the morning of July 19th. The chicks have grown quite a bit in that time! Their diving times have gone from lasting only 2 or 3 seconds to about 20 seconds. They also seem to be stretching their wings a bit more than a week ago. This is hands-down my favorite image of the evening! 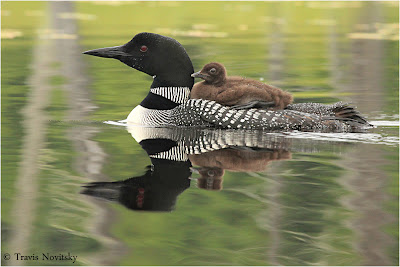 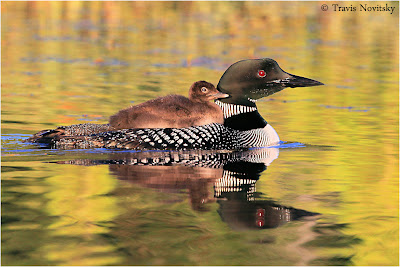 Above: “They sure do grow fast!" - This Loon chick, just one day shy of being two weeks old, is already twice the size it was a week ago. 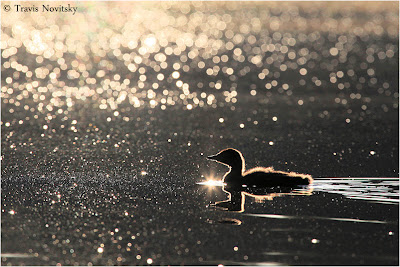 Above: "Sparkling Loon" - A Loon chick swims across the lake while the water sparkles all around it in the morning light. 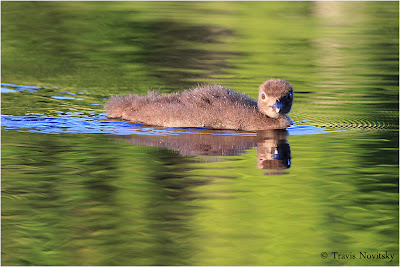 Posted by Travis Novitsky at 3:19 PM No comments:

Loon with baby in morning fog 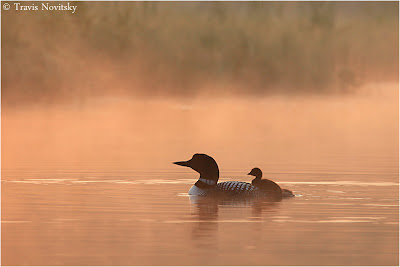 As you are already well aware (thanks to previous posts on this blog), I've been monitoring and photographing a Loon family for the past few weeks. On Friday, July 1st I discovered a Loon nest completely by accident on a local lake here in Grand Portage. I was with my friend Roger and we were looking for turtles sunning on logs, which is a frequent sight on the same lake. No turtles on that day, but while walking a small part of the shoreline we soon spotted a Loon nest out in the tall grass across a narrow channel of water in a protected corner of the lake. Right then and there we made plans to come back the next day and watch the nest all day in hopes that the chicks would hatch while we were there. 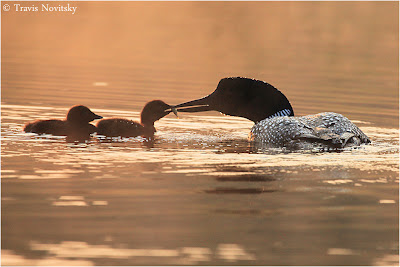 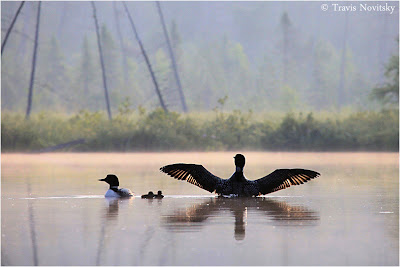 We returned at 9:00 AM the next morning and saw the adult was still sitting on the eggs. This was the beginning of what would end up being almost a two-week stretch of daily checks of the nest. After a week of visiting the nest and still not seeing any babies, I was starting to get a little worried about the eggs and whether or not they would hatch, since most Loon babies are born before mid-July. Finally, when I visited the nest on the morning of July 14th, I noticed right away that one of the babies had been born and was hiding behind the adult on the nest. I watched the nest for part of that day and eventually got some shots of the baby in front of the adult on the nest. 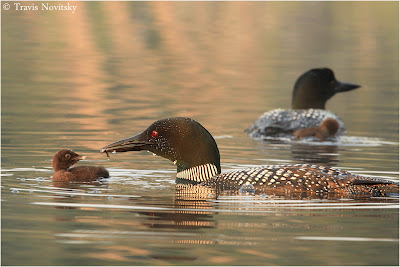 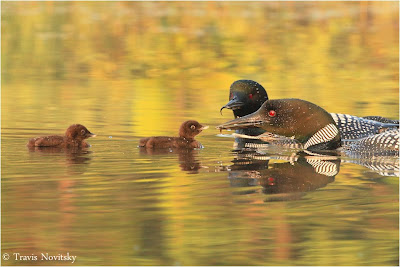 When I returned the next day the other baby had been born and the Loon family was already off the nest and out in the middle of the lake. This was when things got really interesting! Since the 14th I haven't quite been making daily trips to the lake, but almost. Watching the adults interact with their chicks out on the lake has been the most interesting wildlife experience I think I've ever had. It is amazing the care that is given to the chicks by the adults. Most of the time during their first week of life the chicks ride on the backs of the parents. This is done mostly for protection from predators, but also because the chicks get tired easily and need to rest. Now that the chicks are already almost two weeks old they are diving on their own (although their dives only last for a few seconds), they are learning to preen themselves, and soon they will be catching their own food, which consists mostly of minnows (small fish). 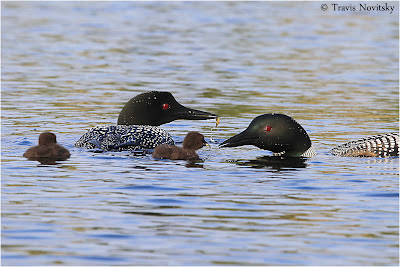 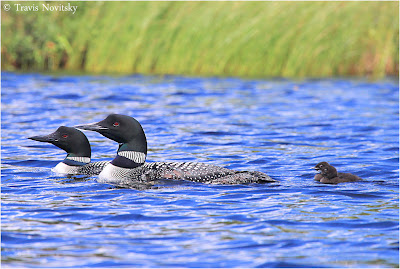 These photos were captured this morning just after sunrise, which so far has been the day with the most incredible conditions for photographing the birds during all my days of visiting the lake. We have been having daytime temperatures of almost 90 degrees with very high humidity, but the night of the 18th and early morning of the 19th the temp dropped into the upper 50's which meant that in the morning there was a lot of fog on the lake. The conditions for picture taking were phenomenal to say the least. I hope you enjoy these images from this morning!
Posted by Travis Novitsky at 3:14 PM No comments: 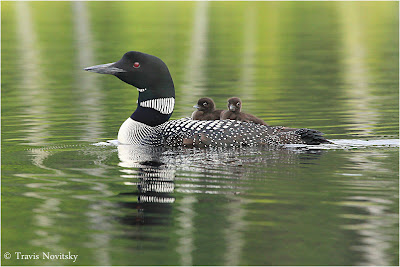 Both chicks from nest #2 have hatched! Yesterday we spent late afternoon and early evening photographing them as they swam around the lake. Once both chicks are born they don't waste any time leaving the nest and once they leave the nest they don't go back. Heading up today to spend more time photographing them. Nice and sunny right now so I hope it stays that way!
Posted by Travis Novitsky at 3:13 PM No comments: 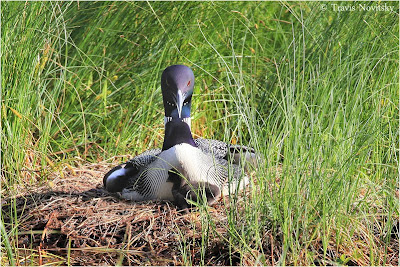 I paid a visit this morning to Loon nest #2 and was delighted to see that one of the chicks had been born! Loon chick #1 was born either last night or early this morning, but the adult continued throughout the afternoon to sit on the second egg, which had not hatched yet as of 6:00 PM this evening when I left the nest. This photo was taken right after the adult called the baby back to the nest. The baby apparently did not want to wait for its sibling and decided to take its first swim on its own!
Posted by Travis Novitsky at 3:11 PM No comments: 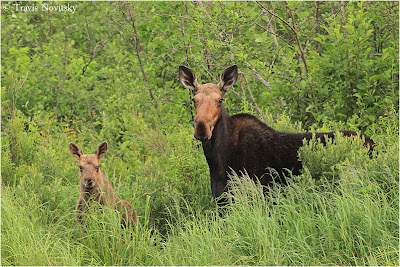 So I went to check on Loon nest #2 again yesterday, still no babies and I didn't feel like sitting there and watching the nest (which I've already spent more than enough time doing!), so I went up to the Pigeon River to spend some time in my kayak. I spent almost 4 hours on the river, and it ended up being time well spent because part way through that time I ran into this Moose Cow and Calf, which made for a great picture! After making this photo they ran off into the woods, so I continued down the river and about a mile later there they were again! I noticed them earlier the second time, and tried sneaking up on them along the edge of the river. I was upwind, however, and before I could get close enough to get good shots they were gone into the woods. I'm grateful that I was able to get this nice shot of them, though! I love how they are both checking me out with their ears pointed towards me :-) 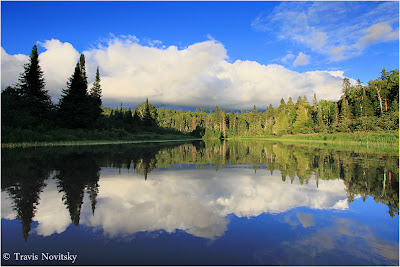 Evening cloud bank over the Pigeon River
After photographing the Moose Cow and Calf I was treated to an incredible display of clouds over the river. This is what the scene looked like about 45 minutes before sunset. Once the sun started to hit the horizon, these same clouds were lit up with all kinds of amazing colors. Between the Moose and the clouds, it was an unforgettable evening on the river!
Posted by Travis Novitsky at 3:55 PM No comments:

Fog in the Sleepy Hollow Valley 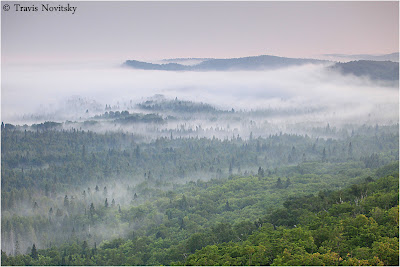 This photo was taken from one of the local fire towers last night just before sunset. It had rained all day and as evening wore on the fog was incredible. An elevated vantage point such as this provided for some spectacular views of the fog as it drifted through the surrounding valleys!
Posted by Travis Novitsky at 3:54 PM No comments: 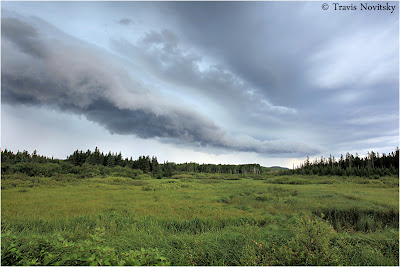 Here's another cool cloud image... this one was taken late yesterday afternoon as the first of several fast-moving thunderstorms came over the tip of Minnesota's Arrowhead region. Not more than two minutes after I made this shot, the rain was coming down so hard that visibility was minimal at best. The wipers on my truck could hardly keep up with it!
Posted by Travis Novitsky at 3:53 PM No comments: 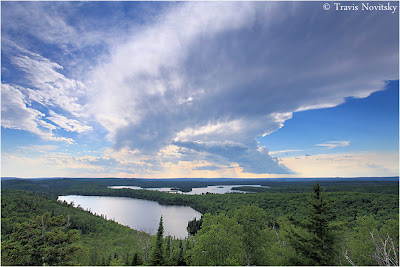 Check out these awesome clouds that I photographed over Swamp Lake today.
Posted by Travis Novitsky at 3:53 PM No comments: 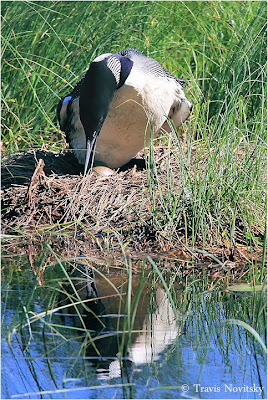 Patience pays off! During another 4 hours of Loon watching today, we got to see the eggs being turned by the parent mid-afternoon, and this time she was facing us so we could actually see what was going on :-) Still no babies, though... stay tuned!
Posted by Travis Novitsky at 3:52 PM No comments: 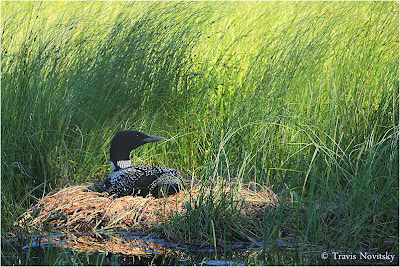 Yesterday we found another Loon nest so today we are heading up to watch it and see if the chicks hatch. 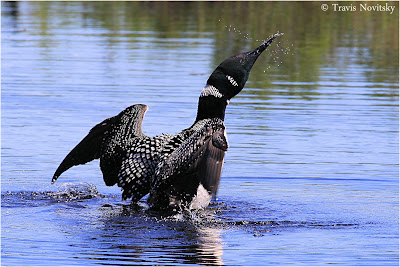 Well, after 9 hours of watching the Loon nest the eggs got turned several times by the adult, but so far they haven't hatched. The one that was on the nest got off the nest 3 times throughout the day and went for a swim while the other adult stayed out on the lake. I'm guessing it was Mom doing all the work :-)
Posted by Travis Novitsky at 3:49 PM No comments: