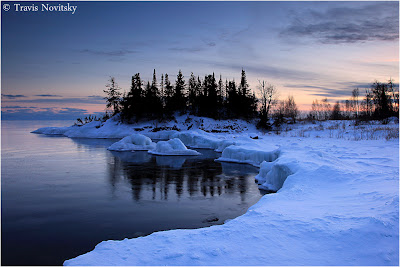 Here is a shot from this evening's sunset at "Coyote Point", the name that I alone have for this location, due to the fact that on more than one occassion I have seen Coyotes roaming along the shoreline here in the winter.

Posted by Travis Novitsky at 3:26 PM No comments: 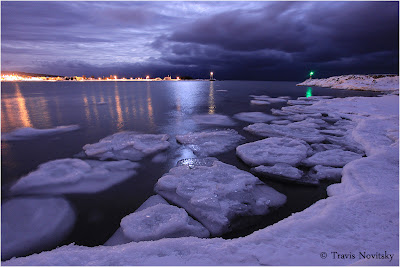 This image was made on my way home to Grand Portage, MN after spending the day in Duluth, MN. The drive back up the shore that night was magical. The clouds were really something, with the moonlight popping through breaks in the clouds every now and then. As I approached Grand Marais I could see that the clouds were going to be very interesting over the harbor, so I pulled in to the campground road and went down along the lake and found these nice ice cakes floating in the corner of the bay. The most amazing thing, however, was that big, dark, almost black cloud bank moving in off the lake. I spent about half an hour in this spot making images with various compositions and exposure settings, this one is my favorite of the bunch. Captured with my Canon 5D Mark II and EF 17-40mm lens, exposure length was 10 seconds, aperture f8, ISO 800. And yes, it was cold! The air temp wasn't too bad at 18 degrees, but the wind made it feel much, much colder. There was a fairly strong wind pushing that big cloud bank in from the lake, so the wind chill was probably below zero.
Posted by Travis Novitsky at 3:25 PM No comments: 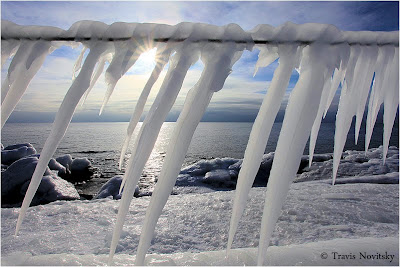 Icicles hang from the cable railing along the harbor breakwall in Grand Marais, MN.
Posted by Travis Novitsky at 3:24 PM No comments: 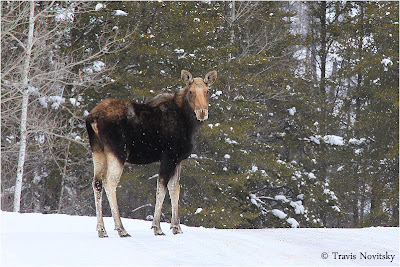 Taken today just past the Seagull Guard Station near the end of the Gunflint Trail. Came around the corner and there was this Moose, standing right in the middle of the road. I pulled over to the side of the road, turned off the truck, and proceeded to watch this Moose for several minutes as it hung out on the road, keeping an eye on me and every now and then bending down to lick salt off the road. This was a nice bonus to an already terrific day!
Posted by Travis Novitsky at 3:26 PM No comments: 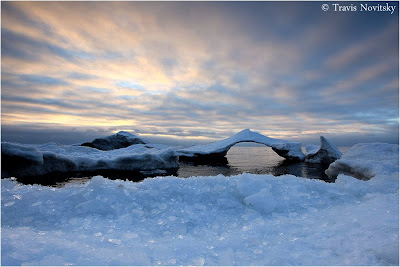 This winter has been quite productive when it comes to having interesting ice formations to photograph, much more so than last winter. December and January had plenty of very cold days which meant that there was quite a bit of ice both along the shore and floating around in various places on Lake Superior. Near the end of January we had a wind storm that came up and blew a lot of this ice onto the Minnesota shoreline of the lake. Just north of Grand Marais was one area in particular where the ice had been jammed into many fascinating forms along the beaches. The wave action not only resulted in the packing of the ice along the shoreline, but also contributed to the hollowing out of the ice from underneath in several places. Several ice arches were formed as the waves continued to work at the ice from below.
The arch shown in this image was the most photogenic arch that I found. On the morning I made this image I was photographing the shoreline with my friend Paul. It was a very calm morning which was a stark contrast to the previous days which had made all these ice formations possible. Paul and I set up our tripods and started making images of the arch. We had only taken about 5 or 6 images each when we heard a cracking sound. Both of us were in the process of moving our tripods to set up a different shot when we heard the cracking. We both looked up just as the arch collapsed into the water. Needless to say, this scene was a lot less interesting to photograph after the arch fell. Thankfully we each got a few images before it was gone! This image was made at 8:03 AM using my Canon EF 17-40mm lens. Shutter speed was 1/15, aperture f16, ISO 100.
Posted by Travis Novitsky at 3:21 PM No comments: 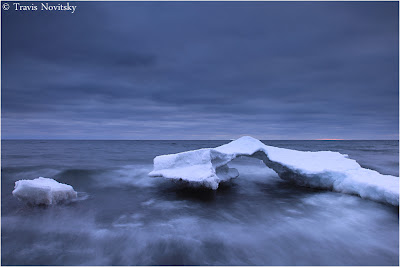 I found this cool arch today just as the day was ending. The cloud cover was pretty thick so there wasn't much "good" light for sunset, but I still found the scene interesting enough to photograph. A few days ago we had a lot of wind which pushed some ice in close to the shoreline, and the resulting wave action as it buffeted the ice along the shore made some neat arches, caves and other formations.
Posted by Travis Novitsky at 3:20 PM No comments: 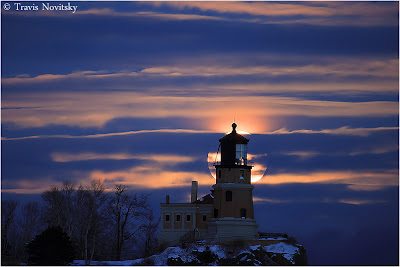 In January it is well-known amongst photographers that the moon rises directly behind Split Rock Lighthouse on the shores of Lake Superior, and as a result several photographers make the journey every year to Split Rock to photograph this event. I don't normally do much shooting at Split Rock since it is a bit of a drive from where I live, but my friend Paul had invited me down this year to photograph the moon as it rose behind the light. We both arrived with plenty of time to spare before the moon came up, so we spent some time chatting with a few others that had gathered with us. I was the only one in our group that had never photographed the January moon over the lighthouse. 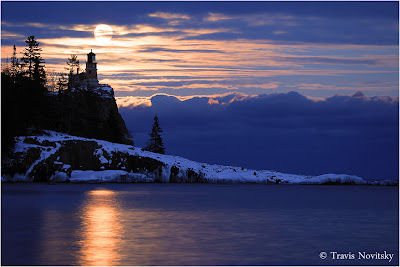 Our group was a little worried that we weren't going to be able to see the moon at all, since there were two large cloud banks that were converging on each other, with only a small sliver of clear sky in between them. Lucky for us, just before the moon became visible the clouds started to break up a little and gave us a nice view of the moon as it rose into the sky directly behind the lighthouse tower. We had to be quick with our shots, as after only a couple of minutes the moon had already risen above the tower. Once the moon was above the lighthouse, we had about another fifteen minutes of nice subdued light as the moon rose into the next bank of clouds. 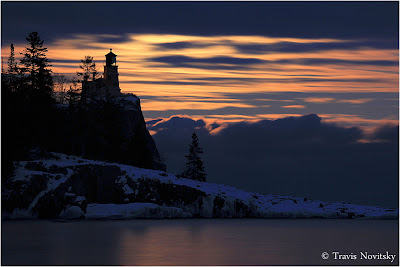 We couldn't have asked for a nicer January evening to photograph this beautiful event. The temperature was about 15 degrees, and the air was nice and still with no wind. The conditions here in January are often much worse, as was proven the very next night when the temperature dipped to twenty below accompanied by a brisk wind.
Posted by Travis Novitsky at 3:18 PM No comments: 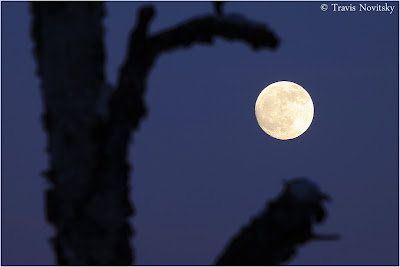 I was leaving work today when I noticed the full moon rising over the Pigeon River. The moon was so big and clear that I had to take a picture of it. This Birch tree is right behind our visitor center at work and I noticed that the moon was lining up with the tree and it looked like two fingers "pinching" the moon. Pretty cool :-)

Posted by Travis Novitsky at 3:18 PM No comments: 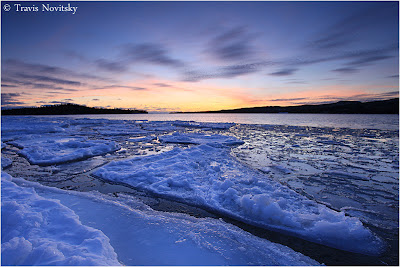 Sunset over Lake Superior this evening was one of the best I've seen in a while... and right now it is very still and calm outside (and relatively warm!), with the light from a half-moon illuminating the landscape. What a beautiful day!
Posted by Travis Novitsky at 3:17 PM No comments: